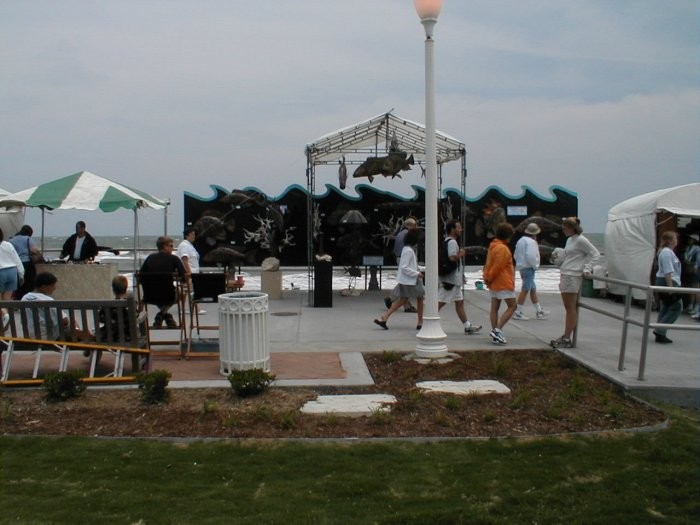 The first  art show I went to was typical of me then, sometime mid 1973. I had just come back to St. Petersburg Fl. my hometown from Mexico and

got a call from someone I had met while at the Los Castillo in Taxco Mexico studying. He was a jeweler that had a shop in Coconut Grove, Miami. He asked if I had ever done an art show, I said no but would like too as I needed money and heard that was a good way to make a little. He said there was a great show in Ann Arbor Michigan and he would go if I would too. I had a van and some art work. The show was a few weeks off so I could make a few more sculpture’s before we left. I had heard that hot air ballooning was big up there so I made a few using copper toilet floats for the balloon. So off we went to Michigan. I was used to driving long distances as I made 12 round trips from St. Pete. To Taxco Mexico which is between Mexico City and Acapulco.

Did I mention we didn’t register or pay for spaces, we just thought we would set up and sell stuff. We got to the show two days early and found out that it was three shows merged into one gigantic art show. Spaces were expensive so the first day we just set up on a median in front of the show. There was us two and a guy in an old bread truck from Northern California and he was a trip. Full beard long hair dressed in a robe selling Pipes for smoking pot he made from elk antlers. Sure I bought one it was well made and I never saw another like it.

We lasted almost all day before the cops told us to move but because the streets were full of people he said after the day ends. We did  and moved down about 100 ft. and he didn’t catch us until late in the day. The next day I found an empty space in the show and set up there and stayed the other two days. Yeh people next to us were “so did you break down on the way here” yep !

I made a little over $2000. WOW holy cow that was big money in 1973. So I started doing art shows and worked my way up to 30-35 a year. Driving as far as Delaware but staying mostly on the east coast except for Ann Arbor, Grand Haven, Flint, Midland etc.

They are hard to do and I slept in my van to save money. At the time I didn’t think it was all that bad but it was just hard and the weather was well, just drive to Michigan just to have the show cancelled for weather. Being an artist does have some great things but shows were not really one of them. As time went on and I gained name recognition it got better and the prices started to climb as my following were willing to pay more. Really I could go on and write a book about doing shows ,art people I met and just weird people that just came to a show to walk around in some strange getup. The guy dressed as a cowboy ,everything worn like he had been riding for days, dusty with spurs carrying a saddle and blanket through the show several times and at different shows. Yeh Never a dull moment.