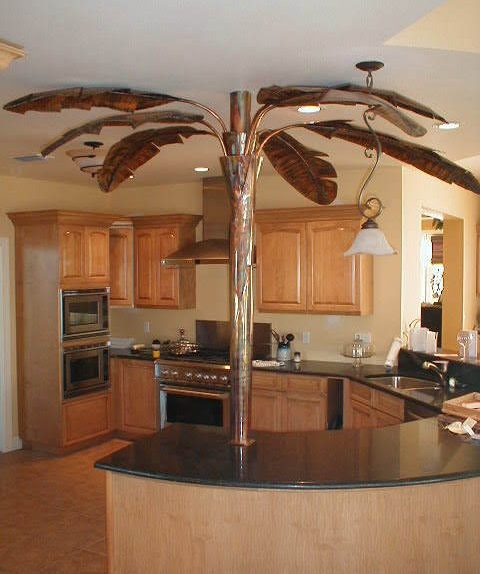 Several years ago I got a call from someone who had purchased a sculpture from me in the past. She said “I have a friend that needs some help with a pole in her kitchen” could you drive down and look at it.  Now at first, I thought this was the same person who wanted to know if it was OK to have a Maryland Stripper in Ft. Myers.  It wasn’t.

Shortly thereafter, I was in her kitchen looking at this pole. I was like so why is there a pole in your counter? She said during her remodel, the engineer said that if we were going to add a second story, the pole ad to be right there, not anywhere else, but right in the middle of my kitchen.  She was struggling to come up with idea’s to transform the pole into something else, she thought of trying to camouflage it somehow.

It was weird because as I first saw the thing in her kitchen I was thinking tree but the base and roots might take up to much counter space. It hit me why not a Banana tree with big leaves at different angles. So after some discussion I was heading back to my studio thinking about how I would make it happen.

A friend just a block over from my studio had Banana tree’s, so off I went to get one to bring back to the studio to examine. This is why I love sculpting it was like a new adventure trying to figure out how I was going to make a Banana tree and pull it off. Holding the leaves on the trunk, and making a fixture that’s hidden behind the leaf bases was challenging.

The banana tree turned out very functional as it clamped to the pipe. The sockets for the leaf stems were at slightly different angles and allowed many different elevations for the leaves. I really built about half of the sculpture on site which was nice to study it as I made it.

In the end, she was very happy as it became a center point of interest in her home. With each leaf being so colorful and different nobody even noticed that she had a pole in her kitchen.