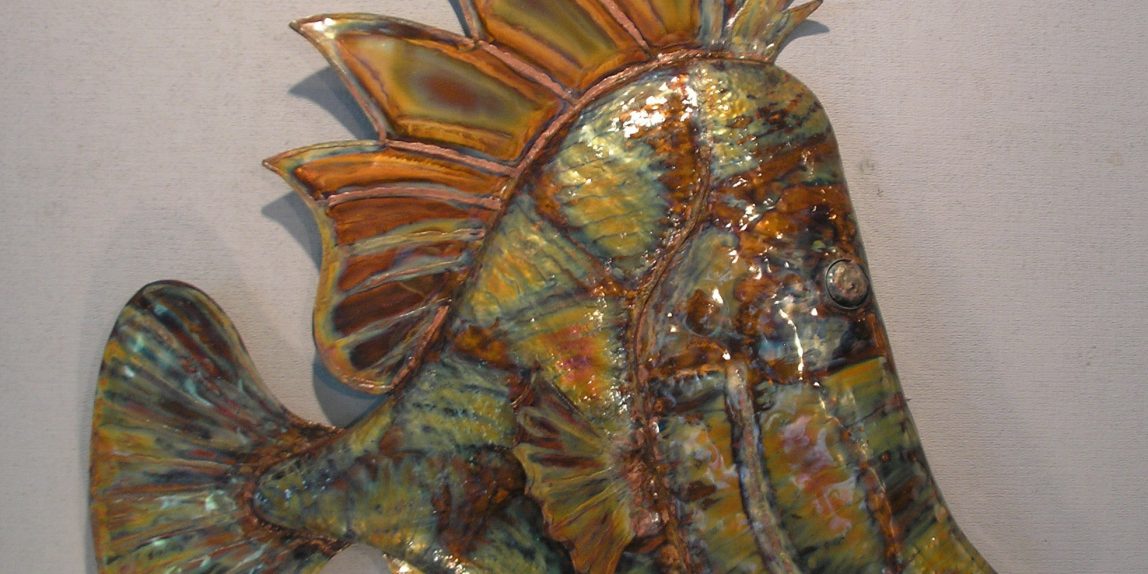 So many people that buy artwork generally don’t think about copyrights that the artist may have on a particular piece of work. At art shows attendees might not think twice about taking photo’s of the artist work. Some artist will say no photo’s please, others don’t really think about it but should, and here’s why.

My Purple Tail fish was created in 1996 on a drawing board in my studio. I like to sketch idea’s and this was one I drew which was life size about 40″ by 40″. I liked it so much that I thought I might make one! Two months past and then I found the time to create it and it came out great.

The Purple Tail had all the attributes people had been telling me that they liked about my fish when they purchased something from me. Women especially because they are the one’s that allow a fish (sculpture) in their living room, kitchen or entry foyer.

The first Purple Tail I sold was in the first hour at the Boardwalk Art show in Virginia Beach. I knew it was no mistake and as soon as I returned to the studio I made another. The problem was and is, is that I love what I do, just as I enjoy talking about the fish and how they are created.

A man from Haiti purchased three of my fish, one which was the Purple Tail.  Three years later, I found out this same man was unscrupulous in bringing them back to Haiti to knock off sloppy copies in a steel, not copper and them painted them in bright colors to export them to the USA. My designs were stolen and that realization did not sit well with me.

I am a lucky guy, and luck was with me one day when I went to see an Attorney in Tampa who is a Copyright ,Trademark and Patent attorney, Art Fisher III. Soon thereafter he filed suit in federal court.  It took three long years and we were finally in front of a federal Judge in my district. I was nervous as you can imagine but I showed the judge my work , my patterns for these fish and my original sketches.

Prior to going to court I had paid to expedite the registering of my copyright to these pieces, several thousand dollars. My attorney prevailed on my case and the judge ruled I had been infringed and won with a 13 page ruling that gave me ownership to all angles, shapes and related sizes on each fish. If I had registered a copyright for these fish within 90 days of authorship or completion, I would have also been awarded a monetary resolution also.  So I now copyright everything I create and move on.

As a artist starting out, you don’t think of registering a copyright, as all you want to do is make art.  Now, I’m a frequent visitor at the online Library of Congress Copyright office. I would have never learned how to protect my art, or made it to court without Art Fisher III, and Pat Weese to whom I’m indebted to.

Who ever thought that that day in 1996, creating a Purple Tail fish would introduce me to a Lawyer.